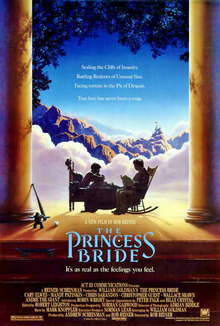 The Princess Bride (1987) is a movie that defies genres. It’s an adventure film with swashbuckling pirates. It’s a fantasy film with giants and six-fingered men. It’s a comedy with numerous quotable lines. It’s a family film about storytelling. It’s all these things, and more, which is part of its appeal (even if it makes the whole movie difficult to classify or market). The real trick with The Princess Bride is that it is subtle with its self-awareness. While other films may go so far self-aware that they’d break the fourth wall (a la Deadpool (2016)), The Princess Bride manages to poke fun at these classic genres with a knowing wink to the audience.

Of course, this is part of its appeal. Many self-aware films make overt references to other big-hitters in their genre, thus relying on the audience who has done their homework to understand the joke. In The Princess Bride, there are no references to The Lord of the Rings, or The Chronicles of Narnia, or any other notable works of fantasy. It is its own story that somewhat plays on the fantastical elements of the genre, but in a way that could be entirely plausible (like the Fire Swamp and ROUS). Because it never goes out of its way to parody its genre, it stands alone as a fantastic spectacle.

My only qualm with this film is that, while it is a great movie, and definitely a classic, its quotable lines are almost too commonplace now. In fact, there are even a few memes that originated from this film from quotable moments. I personally think the quotable lines from movies like Airplane! (1980) and Monty Python and the Holy Grail (1975) are much funnier, even if they aren’t as ubiquitous as the lines from The Princess Bride. Of course, this is likely just my preference and taste for comedy (which itself is already a little odd).

A timeless classic that still stands up today, I give The Princess Bride 4.5 stars out of 5.