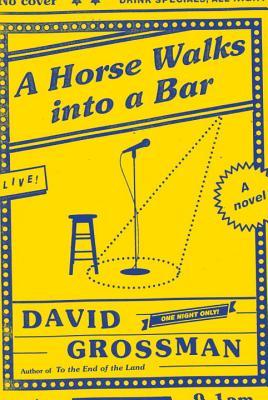 Somewhere along the line, I saw that this book won the Man Booker International Prize this year and put it on my “to read” list on Overdrive. I wasn’t quite sure what to expect, other than perhaps a little bit of comedy, considering the title is a basic setup for a joke’s punchline. In that sense, the book delivered on that premise by being about a stand-up comedian in a nightclub giving his routine to the audience. I did not expect, however, the deeper subtext about the character and his relation to the narrator. It’s in this subtext where we find the meat of this story.

It has often been said that “Sometimes all you can do is laugh to keep yourself from crying.” A Horse Walks into a Bar epitomizes this statement by blending serious subjects like cancer, death, and the Holocaust with a smattering of jokes, physical comedy, and anecdotal monologues. It’s in this contrast where we find how uncomfortable society is when dealing with the difficult subjects of life. I know I usually use comedy to cope with challenging situations, often in an inappropriate accommodation to the dour mood. In the end, we’d rather not address these facts of life because they don’t bring any joy into the world.

Partly due to a lack of explanation, as well as a somewhat jolting and meandering storytelling method, the plot of this book felt a little light, if not downright confusing. I’m sure if I had paid more attention to the words spoken by the ill comedian (who himself was kind of weird) I would have pulled more out of it and understood it better. Unfortunately, my mind always clings to the jokes, of which there a few good ones, and tends to ignore anything else that might be significant.

A bit uncomfortable, but poignant nonetheless, I give A Horse Walks into a Bar 3.5 stars out of 5.