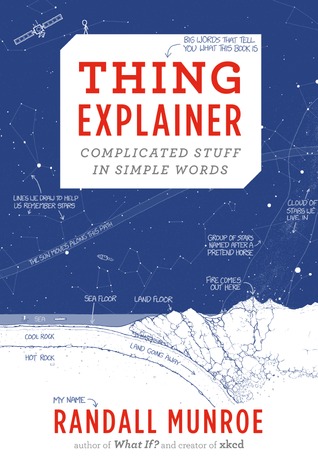 Growing up in the 1990’s, one of the defining books that helped me understand the world around me was David Macaulay’s The Way Things Work. Using “cartoonish” drawings of plenty of everyday (and not so everyday) machines, I gained plenty of useful knowledge that probably led me to eventually earn my Master’s Degree in Mechanical Engineering in 2009. While Macaulay’s illustrations were straight forward enough that they didn’t need explanations, some concepts around today certainly need some words to help gain an understanding of the way things work.

Enter Randall Munroe, famed “xkcd” webcomic author and an all around smart guy. In late 2012, he published a comic that described each of the systems in NASA’s Saturn V rocket with simple words. Described as “U.S. Space Team’s Up Goer Five,” the concept of using shorter, more common words to explain complicated concepts came to its full fruition in Thing Explainer. Using the thousand most common words, Munroe manages to humorously and thoroughly explain such “things” as the U.S. Constitution, The International Space Station, and the Large Hadron Collider (amongst many other common and complicated ideas).

While the concept is fun and this book could easily be used to help children understand these fascinating ideas, the thousand-word constraint is also its biggest weakness. Sure, I could deduce that “shafts” were usually “sticks” (or “hallways” if they were like mine shafts), and “fire water” often meant gasoline (or some other combustible fuel). However, I often found myself trying to figure out what the actual name of the item or part in question was because the “simple” name wasn’t self-explanatory. Also, it was sometimes a challenge to read all the small text, as it usually wasn’t arranged in a linear format, instead appearing in chunks around the illustrations to be close to the parts that were being described.

A unique concept to bring advanced technological knowledge to everyone, I give Thing Explainer 4.0 stars out of 5.