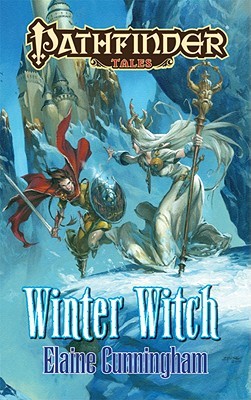 Years ago, after completing my first NaNoWriMo, I received this book as a prize. Seven years later, as I try to read all the “unread” books on my bookshelf, this book finally made its way into my “read” pile. Full disclosure: I haven’t ever played any tabletop Role Playing Games (RPGs), be they Dungeons & Dragons or Pathfinder. Because the Pathfinder universe defines this book’s setting, I didn’t have any of the prior background to help me understand the setting better. Still, as this book was a conventional example of the “high fantasy” genre, it was relatively easy to get up to speed.

Of course, partly because it is a conventional example of the fantasy genre, Winter Witch didn’t have that many surprises. Characters going on adventures to prove themselves / save someone / avoid responsibility seem to be pretty typical in this genre and this book certainly had all of them. While I did appreciate the “magic” of the mapmaker turned wizard (or would that be a self-renounced wizard, turned mapmaker?) as a unique and interesting ability, it certainly read as a simple tie-in to the Pathfinder RPG via the “dungeon master” role. Similarly, the aggressive female protagonist was somewhat unique for her gender, but could easily have been any male warrior trying to save their little sister.

Despite being released three years before Frozen (2013), parts of the plot feel very similar. Ice magic. Separated sisters. Love interest betrayal. I know Frozen is based on a much older story, so I’m curious if the inspiration for this story was the same. If anything, I would expect a book like this would receive an uptick in sales just on the comparison. Either way, the story was predictable, and the only amusing part was when the mapmaker tells everyone that they should let everyone else do whatever they want.

An average fantasy story with a modicum of interesting attributes, I give Winter Witch 3.0 stars out of 5.