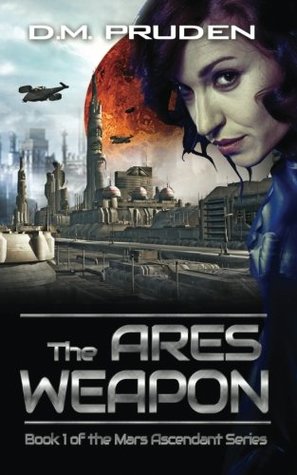 The sci-fi genre is interesting in that it has almost limitless possibilities, but the physics of our universe usually constrains the stories, so they are at least somewhat believable. As a result, and in part due to our past and current space-travel capabilities, the genre has become rather stale. Unfortunately, this is also because a few franchises dominate the landscape and any work that seems similar to it are deemed derivative. Consequently, I have read a number of almost interchangeable sci-fi stories, and The Ares Weapon is just one of them.

While the occasional proofreading or formatting error is distracting in this story, much of my qualms lie with the characters’ decisions and motivations. Instead of making sense, the decisions sometimes seem to merely exist only to move the plot along to a pre-determined path the author wanted to take. Similarly, the motivations don’t seem to make sense, especially with some of the more ancillary characters. And while the main character was engaging and interesting, the almost random switch over to a third-person perspective to fill in information via the “Roman” characters (who were incredibly out of place in this universe, in my opinion) was jarring and disrupted the exciting flow of the story.

As I mentioned earlier in this review, there are plenty of stories just like The Ares Weapon. While it’s not as good as The Golden Age of the Solar Clipper series by Nathan Lowell, it’s certainly better than Commanding the Red Lotus. I think today’s modern sci-fi authors are too focused on the “on the ship” part of the story, and not the “on planet” sections which have made franchises like Star Wars and Star Trek so popular. Case in point: this first book in The Mars Ascendant series spends almost no time on Mars at all, even if it hints at eventually getting there in later books.

Just another spaceship crew constrained to their spaceships, I give The Ares Weapon 3.0 stars out of 5.