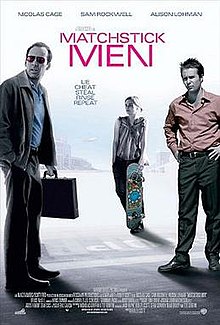 One of the lesser-known Ridley Scott films, Matchstick Men (2003) could have been just another heist film, and in some senses, it is. Upon watching the film again, one can easily pick up exactly when the “long con” starts up and which events lead toward the inevitable conclusion. So, perhaps it doesn’t have the ability to demand repeat watchings (past about two) on its heist aspects. However, I believe the characters are what give this movie most of its charm. After all, characters make a story, and this one has some good ones.

In one of his best “crazy person” roles, Nicholas Cage does an incredible job portraying Roy, a con-artist with severe Obsessive Compulsive Disorder. His performance is often difficult to watch and is cringe-worthy in the opening act. If this is what it’s truly like living with OCD, I never want to joke about having it . . . ever. I’m almost amazed he even managed to con as many people as he did considering how serious his condition appears. The little tics and freak-outs Cage brings to this character make his disorder real to the audience.

Sam Rockwell ends up portraying the same kind of character he always does in these types of films, but Alison Lohman ends up being the Yin to Cage’s Yang with her role as Angela, Roy’s 14-year old daughter. She pulls out all the stops and tropes of the teenage girl, which makes for a convincing performance, especially since it’s a performance within a performance. Because her presence changes Roy for the better, it’s obvious something was missing in his life, and she managed to bring him stability by providing it. On top of all these characters, the spot-on Hans Zimmer score and choice of musical pieces to accompany it make Matchstick Men a fun watch.

A standard heist film with a non-standard main character, I give Matchstick Men 3.0 stars out of 5.