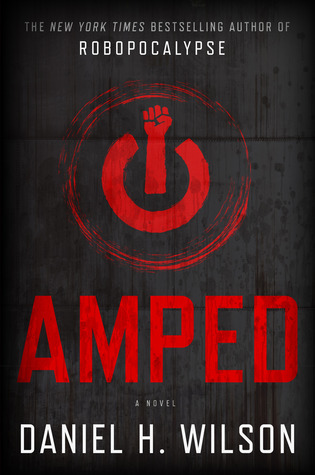 Having read Where’s My Jetpack? and Robopocalypse from Daniel H. Wilson, I had some high hopes for this book. Clearly, Wilson has a depth of knowledge about current and upcoming technologies that allows him to write succinctly both non-fiction and fiction. He can fuse the science with either humor or action and maintain an accurate sense of it without having the details bog down the plot. In Amped, Wilson explores a world where humans use technology to assist their bodies, either to overcome a disability or to overcome their humanity.

Unlike Robopocalypse, which was primarily a collection of intertwined vignettes, Amped follows a single individual through the effects of a fear-filled society charged by an inferiority complex. While the main thrust of the plot is about mental augmentation, there are mentions of other exciting technologies, including self-driving trucks and mechanical exoskeletons. Overwhelmingly, though, the brain-altering technology is the focus, as it hurtles the United States into two camps: ordinary people (aka “Reggies”) and “amps.” It was interesting to see how quickly discrimination came about in light of a clear delineation between humans and modified humans.

Even if the plot was a little hard to follow at times (perhaps due to me listening to it on an audiobook), the capabilities of the mental augmentation certainly felt realistic and plausible. While these embedded chips could solve many brain-related problems, the main point Wilson gets across is, “where does it end?” If we wipe out handicaps, can we also enhance ordinary people to super-human status? There’s certainly an interesting moral conundrum here, and I hope this fictionalized account will get people thinking about the answers before this reality is soon upon us.

Another great book warning about the potentials of future technology, I give Amped 4.0 stars out of 5.