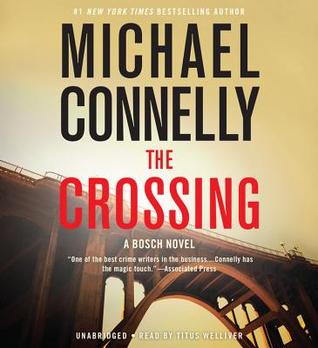 Having already blasted through the rest of the Mickey Haller series, I finally arrived at a book that didn’t center around the defense lawyer. Instead, The Crossing follows Harry Bosch, Haller’s half-brother (which we learned back in The Brass Verdict). I realize that Mickey Haller is merely a spin-off series from the main Harry Bosch series, so it was interesting to finally enter the main storyline of Connelly’s longest-running character. Now I see that he writes Bosch books in third-person, as compared to Haller’s first-person, which was why I was confused when the POVs switched in one of the previous books featuring both of them.

Coming into this series at the twentieth book was a little jarring to me, but not entirely disorienting. There were plenty of references to previous books I had not read; but by the sounds of them, these predecessors were certainly exciting. What probably helped with my transition into this series was that Bosch retired from his job in the police department, thus creating a new start for the character that could be used to explore some interesting scenarios without being burdened by the bureaucracy of his job.

While Connelly’s writing is still superb and suspenseful, the one aspect I found to be a bit unbelievable was Bosch’s innate sense of what was “wrong” with the current investigation. Just based on one single, minor detail, he was able to unravel the deeper conspiracy involving other, corrupt police officers. What if he hadn’t noticed? Would he have still managed to get to the bottom of the truth? Either way, I might have to pick up the earlier books in this series, just so I can get more of the story behind the briefly referenced excitement Bosch had to go through in the past.

Proof that sometimes it’s difficult to quit a job after having done it for so long, I give The Crossing 3.5 stars out of 5.