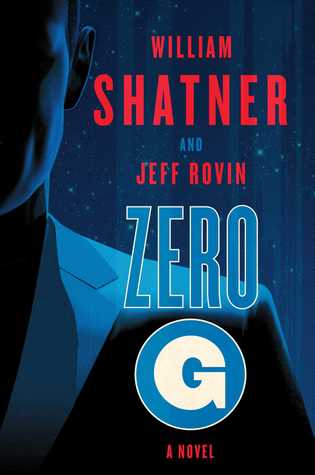 William Shatner, best known for his acting in the popular sci-fi series, Star Trek, is not someone who I thought would also be a writer. Of course, after reading Zero-G, I’m still not convinced, even with the help of ghostwriter Jeff Rovin. The book had an interesting premise, but the exposition and plot were so slow and clunky that it was hard to get into it. I will say there is an appreciation of the challenges of space in this book, but it almost plays a backseat to an aged government official trying to relive his glory days (sound familiar?).

If I were to re-write this book, it would have been considerably shorter, possibly even a short story. As it is, the first third of the book is almost useless, filled with detailed explanations of the characters’ backgrounds and relationships. Even the first action sequence only emphasized that the main character is reckless and flies by his own rules. When it came to the core of the plot, I never felt a sense of urgency to take out the threat of the space-weapon, mainly because it acted “randomly” (read: whenever it might suit to move the plot along).

For a book about an FBI station in space, the mystery solved by the deputy director seemed quite a bit beneath his station. In fact, I was surprised he even handled it since the whole case appeared to be obvious right from the start. There wasn’t enough development of the lesser characters to even know who they were and why they had any motivation to perpetrate the crimes they did. Aside from the main character, most of the character focus appeared to be on the gender-switching assistant, probably to make the book “hip” and “trendy” amongst the modern and liberal-leaning readers.

An interesting concept that falls flat on its face immediately after the prologue, I give Zero-G 2.0 stars out of 5.