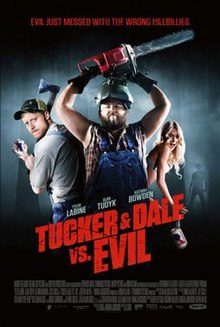 I’m not really a fan of the horror genre. Mostly, I feel the plots are contrived, the characters are downright idiotic, and the violence is over-the-top. Of course, when I heard about Tucker and Dale vs. Evil years ago, I said, “pass.” The friend who suggested I see it assured me that it wasn’t like all the other horror films. The fact is, it is exactly like all the other horror films, but it is self-aware of this fact. Because the film is self-aware, it recognizes every single horror genre trope and makes fun of it.

As time went by, more people suggested I see this film, so I finally caved during a slow weekend at home. Being the self-aware film that it is, the plot is simple and the production values are limited, at best. What really makes the film enjoyable to watch is the fact that the whole premise is practically a “comedy of errors.” Lack of communication just adds to the hilarity as a bunch of cliché college students find themselves killed off one-by-one by their own bad luck. If I were to compare this to another, well-known horror franchise, this film has the setting of The Evil Dead (1981) with the comedy of Army of Darkness (1992).

Unfortunately, because it holds to the tropes of the horror genre, Tucker and Dale vs. Evil doesn’t have much to offer other than a funny commentary on the horror genre as a whole. The independent nature of the project and limited budget really show through, even if the comedy is spot on. The main characters of Tucker (Alan Tudyk) and Dale (Tyler Labine) are worth the watch, regardless.

An amusing examination of the ridiculous nature of horror films, I give Tucker and Dale vs. Evil 3.0 stars out of 5.