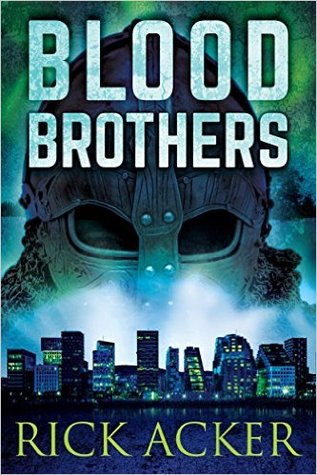 Even though I don’t usually read books in mid-series, I’ll make an exception for a book I receive for free. Fortunately, I was able to deduce what happened in book 1 of the Dead Man’s Rule series just based on the context of the characters’ interactions. In fact, I’d probably like to read Dead Man’s Rule, since it sounds like it was a pretty exciting plot. Of course, I’ve found legal thrillers like this one to be pretty stand-alone, which helped me really get into its engaging, if not somewhat predictable, plot.

What I found most interesting about Blood Brothers, was the Christian undertones it took in its narrative. These moments helped to flesh out the characters, but only once did it feel like the reader was being browbeaten with some ideology. The infusion of realistic Christian characters was a pleasant surprise, especially considering that their beliefs did help to guide their actions in this taut, legal thriller. It even went so far as to provide a contrast to some of the less scrupulous characters, thus making it an easy choice on who to root for during the trial. At the very least, it wasn’t pushy with its Christian themes, which can sometimes happen when writing to that particular audience.

I really liked the parallel plotlines that helped to expand the story into something more than just a courtroom drama, even if the one centering around the pharmaceutical development was a bit predictable and cliché. Overall, this was a well-written piece with a believable sequence of events, a logical set of conclusions, and an exciting set of twists. I wouldn’t be surprised if something like this were to happen in the real world, since so much of the plot was well-researched and based in facts.

A solid story with plenty of excitement and intrigue, I give Blood Brothers 4.0 stars out of 5.